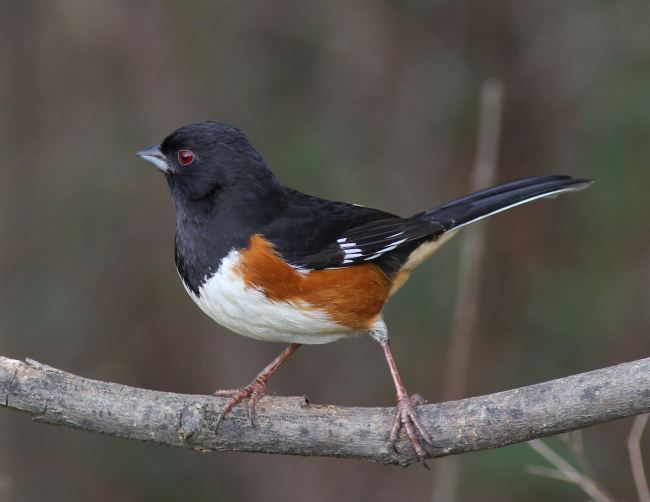 “I saw a weird bird this morning,” began the note I wrote to my stepfather, which I would leave on the counter for him to pick up as he left for work.

The bird I’d seen was odd not because of what it was, but because of what it was not. It was not an American robin. It was a big, fattish songbird with dark upperparts and rusty flanks, but it gave off a maddening vibe of not-robin that I didn’t know how to interpret at the time. I’m surprised my stepfather was able to decipher the garbled description that my untrained eyes and mind came up with. Bertrand Russell was right – non-experts make terrible witnesses.

I’d seen an Eastern towhee. Unlike robins, which are in the thrush family, towhees are basically gigantic sparrows. They’re named for their enthusiastic calls of “Tow-hee, tow-hee!” which can often be heard at dusk in Eastern states (a closely related bird, the spotted towhee, lives in Western states.) The male wears a handsome black coat with white accents over a rufous vest and a white shirt. The female looks a little drabber in her brown jacket.

A major difference between towhees and robins is that towhees hop rather than walk across the ground. Scientists don’t know why some birds hop while others walk; possible factors include leg length, energy expenditure, weight, and the evolution of ground-dwelling vs. arboreal species. I say that a scurrying robin and a bouncing towhee are equally cute.

Towhees also tend to be more reclusive than robins, despite preferring similar suburban and woodland edge habitat. They like to stay in the bushes, kicking up leaves with their feet in the most charming manner to get at insects.

The Eastern towhee remains one of my favorites because it was the first bird that really got my attention. The attractiveness and peculiarity of this species encouraged me to look about and perceive the beauty and variety of the natural world, and to forge a friendship with my stepfather based on my newfound interests. Hooray for the not-robin!