Snell’s Law governs the order of the colors we see in the rainbow. Art courtesy of Wired Science.

2013 has been a difficult year for people who don’t like gay people. The Supreme Court struck down Prop 8, America got its first openly gay pro athlete, and now it looks as if the United Kingdom will make the leap from civil unions to full marriage rights. This may be the gayest year on record, narrowly beating out 1897 (don’t act like you don’t know about 1897!)

In the face of major legal battles lost or nearly lost, homophobes on the internet have taken a maudlin and pathetic tone, seizing upon minutia and moaning so pitifully that I can’t help but be reminded of Adrien Brody’s weepy performance as Władysław Szpilman in The Pianist: 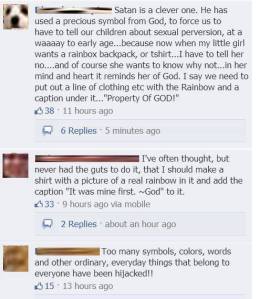 Learn how to hide your feeeeelings

As you can see, a lot of this whining and bitching centers on the idea that gay people “stole” the rainbow. For this to make any sense whatsoever, you have to assume that Christians owned rainbows in the first place. I called the US Copyright Office about this and they laughed me off the phone.

Perhaps I should illuminate this situation with a little factoid not known to many: rainbows are as important to physicists as they are to Christians, if not more. Many advances in physics, from Newton’s work on light to the much later invention of the laser, owe a lot to experiments involving PRETTY COLORFUL RAINBOWS. They’re among the most important objects in the history of science. It’s unsurprising that physicists can develop deep feelings for them – in For the Love of Physics, heterosexual MIT professor Walter Lewin claims to schedule showers around the possibility of seeing rainbows in his bathroom.

Yet I have never encountered a physicist lamenting the gay conquest of the visual spectrum, or the use of rainbow imagery in the Old Testament for that matter. Perhaps this is because physicists are confident that the visible spectrum exists outside of any cultural narratives humans may provide for it. A Christian looks up in the sky and sees a symbol; a physicist looks up in the sky and sees a fact. Something that’s woven into the fabric of Nature itself cannot logically be stolen by a group of hairy bipeds. Apparently, God is weaker than Nature – His symbolic rainbows are vulnerable to theft.

This is the visible spectrum. These are the photons we can see. This was here before the Israelites told spectacular tales of an ark-builder named Noah, this was here before the gay rights movement erupted out of a little Village bar in 1969, and this will be here long after we are all dead. No political or religious movement is going to pay royalties for this. Only those unaware of their cosmic tininess would be willing to fight gay people for the use of the rainbow – or worse, find themselves poisoned by spite against the wonder of naturally-occurring rainbows. I don’t want to socialize with anyone who would get angry about this. It’s a sign of a cramped, miserable mind.

It’s been hot and stormy here in Knoxville, good rainbow weather, and a few days ago I saw one. Well, part of one, suspended in the steam above a street. I didn’t think “Ohhh, hello gays!” the way I do when I see a rainbow flag or bumper sticker – I thought “Ohhh, hello rainbow! About 40° upwards from the car’s shadow, just like Dr. Lewin said! I wish I could get a better look at you! You’re so awesome!”

This vibrant yet ethereal parallelogram of color brightened my day in a way that was totally apolitical, totally secular. I have knowledge to thank for that. If the universe were so small that petty human squabbles about symbolism were all that mattered, I think it would be suicide for me.